Have you ever noticed those tiny white-colored half moons near your nail beds? They’re actually called fingernail lunula, and provide valuable information about your health.

Just like a cold or flu might indicate that your immune system needs a little support, your fingernails can also shed some truth about what’s going on inside. Nails not only indicate the state of your health, but they also aid the sensory features of your hands, and have protective functions for your fingers and toes.

What are Fingernail Lunulae?

The lunula means “little moon” in Latin. It is the crescent-shaped whitish area of the bed of a fingernail or toenail.

The matrix of the fingernail (or toenail) is where each nail starts to grow. This is where new cells are made up, which ultimately make up the new nail. The lunula is also apart of this matrix.

Whether you’re missing fingernail lunula or your lunula is changing color, it is always advisable to go see a doctor if you’re also experiencing: 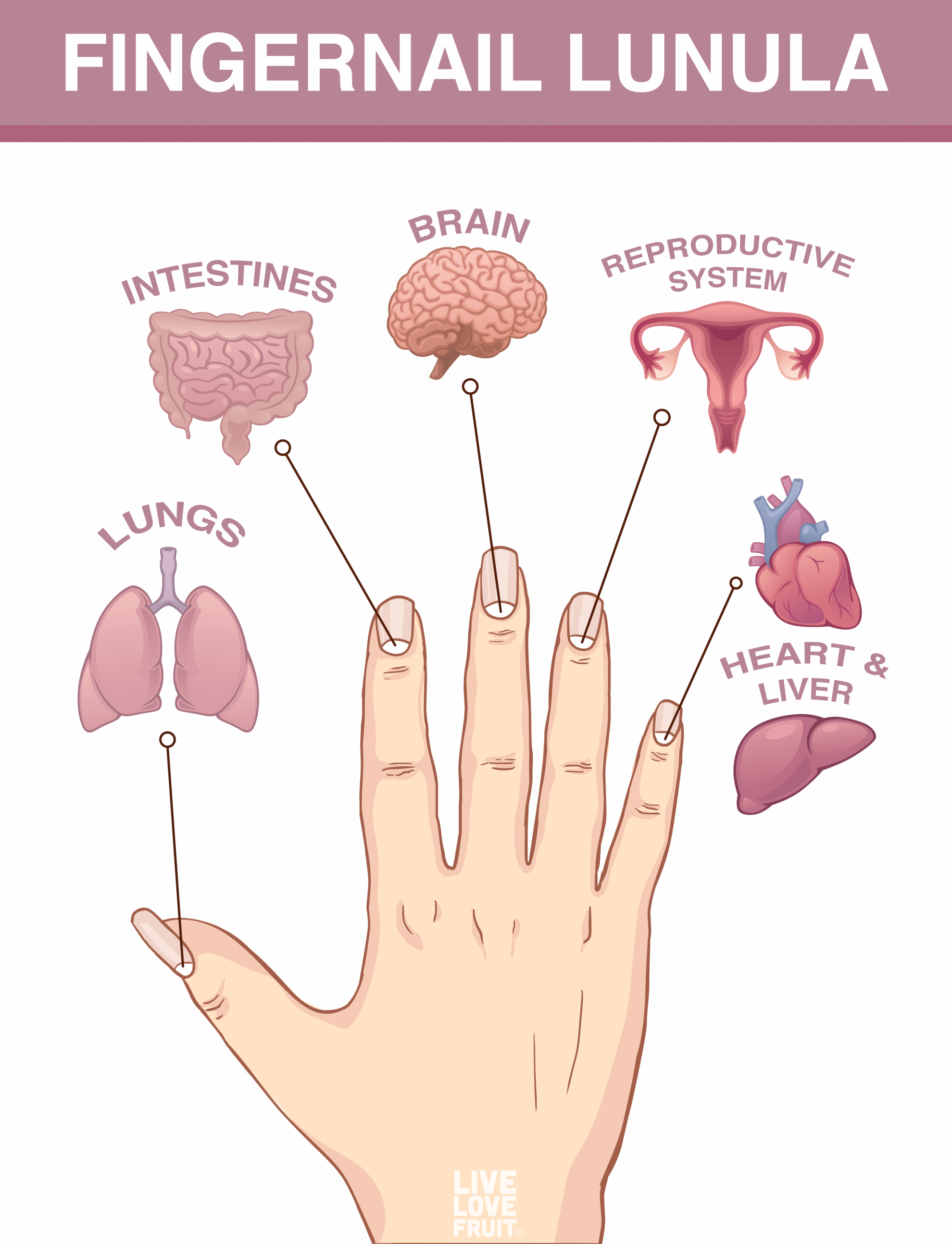 What Fingernail Half Moons Reveal About Your Health

According to Eastern Medicine Philosophy, our fingernail lunula can tell us a lot about our health. Their change in color, shape, or size can indicate different things going on within your body. Here are just a few things to look out for:

If you can’t see your fingernail moons at all, don’t fret. This doesn’t always mean something is wrong. The thing you should be looking out for is whether you have any moons present on your thumbs. Your lunula are almost always visible on your thumbnails – the rest of your lunulae might just be hiding under the base of your fingernail in the skin.

Though the connection is not completely understood, if lunulae are absent on all fingers (including the thumb), you might have anemia, malnutrition or depression (1). Your kidneys may also be having a difficult time if your lunulae are absent (2). For this reason, if you have symptoms of the aforementioned conditions, it is advisable to go see a doctor.

According to one study, missing moons are also associated with issues of the thyroid or pituitary gland, and possible B-12 deficiency (3). If you feel like you’ve been having some health concerns lately, please go get your B-12 levels checked. Most people are low in B-12, so it wouldn’t hurt doing so!

Also, make note that children generally don’t have lunulae on their fingernails. They’ll start to appear as they get older. In other people, lunulae simply won’t appear due to physiological specificities of the nail structure.

3. Large Lunula on All Fingers

If you notice your lunula take up over half of your fingernail, go get your thyroid and blood pressure checked. It’s a little more difficult to tell if someone’s moons are large (because everyone has different nail size and proportions), so if your blood pressure and thyroid are normal, you don’t need to panic.

Large lunulae indicate problems with the cardiovascular system, abnormal heartbeat and low blood pressure. If you’re someone who gets stressed out a lot, then this might be why your lunulae take up over half the fingernail!

White lunulae are healthy and natural, but sometimes the color of the lunulae will change. In this case, you will want to look out for:

– Purple Lunulae: a sign of poor blood circulation and a lack of oxygen to the organs and tissues. If you have chronic dizziness and headaches along with purple lunulae, go see a doctor.

– Blue Lunulae: often caused by systematic drug ingestion, including Exlax, chemotherapy drugs, and other cancer and HIV drugs. A pale blue lunula may also suggest diabetes mellitus (6), and has also been connected with Wilson’s disease and Hemoglobin M disease (7).

– Black Lunulae: black lunulae are extremely rare, but if you have them, you might have extreme heavy metal poisoning.

Each fingernail represents a different part of the body. When a lunula changes on one finger, look out for the following.

– Little Finger: as mentioned above, lunula on the little finger should be almost unnoticeable or completely absent. It is connected with functioning of the liver, small intestine and heart. If the lunula on your little finger is abnormally large, it could indicate high blood pressure.

– Ring Finger: indicates the health of the reproductive and lymphatic systems. If the lunula is barely visible here, you might want to start rebounding to flush the lymphatic system, or look at correcting any digestive issues (like leaky gut) you might be experiencing.

– Middle Finger: responsible for the work of the brain and nervous system. Absence of lunula on this finger may indicate some nervous or vascular system problems.

– Index Finger: highlights the work of the intestines and pancreas.

– Thumb: lunula on the thumb is almost always present, but if it’s not, you might have some issues with your lungs and spleen. Smokers, or those with hypertension might have chronically small or absent lunulae of the thumb.

The lunula affects the way your nail grows, so if its shape is off, your nails will also grow in misshapen. If something is wrong, the lunula can change from its half-moon shape, to more square or triangular. A pyramidal lunula might indicate excessive manicure or trauma (8). Individuals with trisomy (such as Down Syndrome, Edward Syndrome, and Patau Syndrome) might also have misshapen lunulae.

If you notice your lunula has one of the above characteristics, don’t panic. Check to see if you have any of the other symptoms mentioned above, and if there is something that matches up, make an appointment with your doctor to talk about your concerns, and have a check-up. 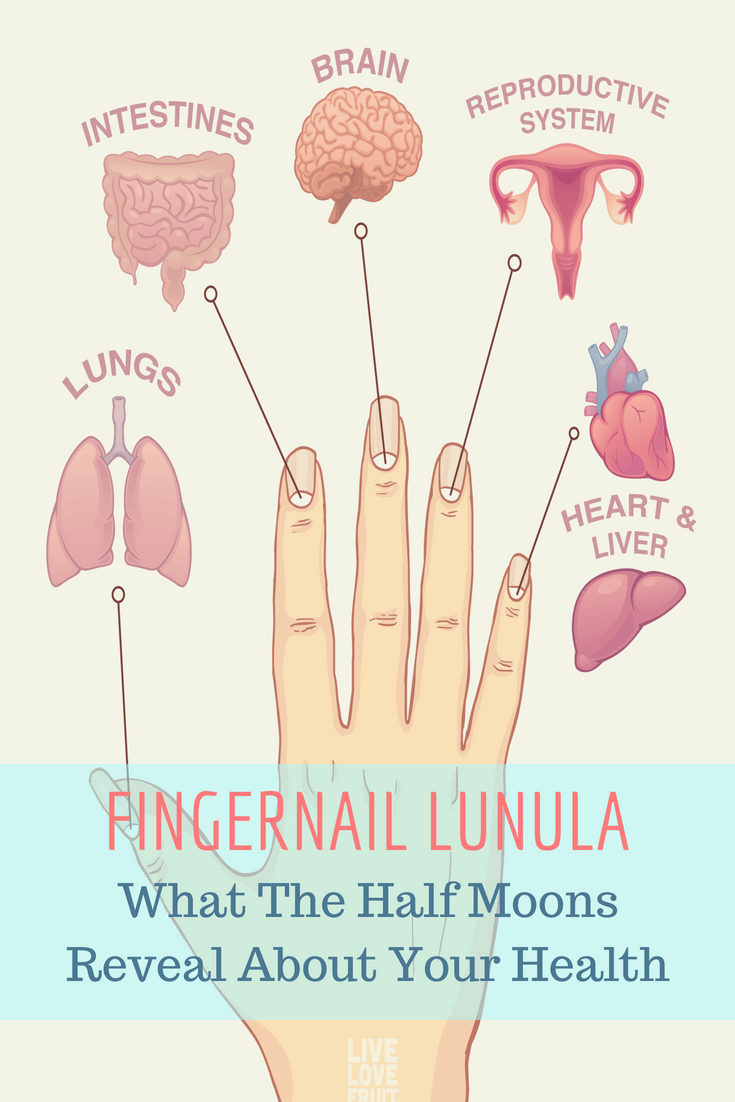 What I Love About doTERRA Essential oils

This Is What Your Food Cravings Really Mean

10 Herbs and Natural Supplements for Depression