All people are more or less aware of the effects of overeating and obesity, and they know that overeating can increase the risk of many diseases, including cardiovascular diseases, blood fat, blood pressure, diabetes, joint discomfort, etc. Also, obesity often causes a decrease in a person’s self-confidence. In the form of hadiths, Islam also forbids overeating and recommends moderation in eating.

Of course, the meaning of undereating mentioned in these narrations is not to lose weight, but it means to consume food as much as the body needs and needs (balanced) so that the person has a healthy and healthy body, because currently some young people in order to have a thin body (the so-called mannequin) ) eat much less than they need, which causes a lack and reduction of nutrients and vitamins, and as a result, these people suffer from physical problems such as OsteoporosisAnemia, chronic headaches, weakness, etc dizziness And… they become

Many people are used to eating too much, for example, these people eat a little too much tonight, tomorrow night a little more and gradually, this happens every day and night; These people overeat out of habit, overeating is a habit that has been unconsciously acquired over the years and today is the time to end this bad habit.

It is true that they say breaking a habit is a disease, but you can get rid of this bad habit.

Imam Jafar Sadiq (a.s.) says: Three things bring enmity with God Almighty, sleeping without waking up, laughing without surprise, and eating to your heart’s content, eating while your stomach is full causes leprosy. 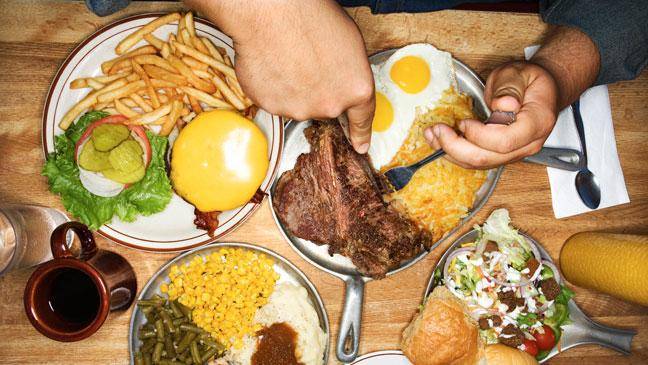 We recommend and emphasize “eat slowly and chew your bites well, do not drink water between meals, sit on the table with one knee and in the manner of slaves, sitting on a chair and dining table is fattening, eating while standing is fattening.”

When you eat fast and in a hurry, the brain does not have enough time to communicate, so the more you chew the food, the sooner you will be full, and the faster and faster you eat, the fatter you will become.

Eating alone is also considered as one of the condemned traits in Islamic medicine, because eating alone causes overeating and ultimately obesity; The Noble Prophet of Islam cursed three people: the one who sleeps alone, the one who travels alone in the desert, the one who eats alone and eats alone.

It is said in the traditions that the separation of Hazrat Yaqub from Hazrat Yusuf for several years was because Yaqub (pbuh) sacrificed a fat ram but forgot to give it to one of his needy companions named “Fiyum” and that is how he got separated from Yusuf. became; From that day onward, his messenger shouted every morning that whoever is not fasting should go to Jacob’s dinner and at night he would also shout: whoever is fasting should go to Jacob’s dinner.

Being satisfied with life depends on sex

Did you know that salty food causes MS?