Dermatophytosis, ringworm or skin fungus is a common skin disease in dogs, cats and humans caused by fungi called dermatophytes. Skin fungi are more prevalent in places where the level of hygiene is low, although in some cases where people wear each other’s clothes or in swimming pools and crowded places such as barracks and dormitories, where there is more possibility of skin contact. Skin fungi may be transmitted quickly from one person to another; Some of these fungi are highly contagious.

– Dermatophytes are very interested in keratin. Keratin is a protein that is produced by skin cells and is placed in the outer layer of the skin. Hair and nails are also made of keratin, that’s why dermatophyte fungi can infect the skin, hair and paws of animals or humans. Persian and Himalayan cats are more at risk of contracting this disease than others.

– Dermatophytes cause the hair to loosen so that hair falls out easily, and this hair loss causes baldness, usually round or coin-like, in that area. Other symptoms of these fungi include small pimples, scaling or darkening of the skin. If dermatophyte fungi infect the claws or nails, they can cause the nail to become deformed or the claws to secrete a slimy liquid.

Some cats can carry the disease without showing any symptoms. These cats are called carrier cats that cause the disease to be transmitted to healthy dogs and cats. Also, dermatophyte fungi can cause small granular lesions on the cat’s skin, which can be felt under the hand as a result of petting. This condition is called millet skin inflammation. 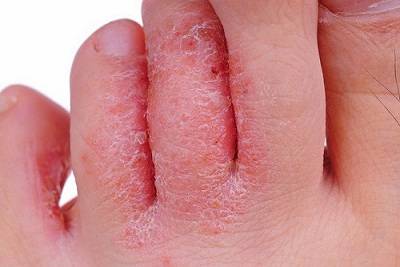 – The symptoms of dermatophytic fungi can be similar to several other skin diseases, so the diagnosis should never be made based only on the appearance and symptoms of hair loss. In case of suspicion of a disease caused by a dermatophytic fungus, the veterinarian can diagnose the disease to some extent by first placing the bald area under the ultraviolet light, which is called Wood’s lamp. Usually, the lesions that some of these dermatophytes cause as a result of their activity turn light green under the Wood’s lamp. However, the absence of these night green seeds does not mean that the animal is not infected, and some dermatophytes do not produce their own color.

Read more about this: different skin fungi and the damage caused by them

– The best way to diagnose dermatophytic fungi is to take a sample from the skin and hair of the affected area and culture it. To perform this simple test, some hairs from the damaged part of the skin are removed with a disposable toothbrush or with a pons and placed in special containers that contain nutrients for the growth of these types of fungi (culture medium). If after some time (usually 5-14 days) the dermatophyte grows in the environment, then it is clear that the animal is suffering from this disease.

How is a fungal infection treated?

In most cases, this disease can be treated by keeping the affected area clean and dry and using topical antifungal drugs. fungal infection Groin usually responds to over-the-counter creams and sprays. However, sometimes it is necessary to see a doctor and take prescribed creams. During the treatment of this type of infection, the following must be observed:

Wash and dry the affected areas with a clean towel

What is nail fungus?