Shouldn’t we eat yogurt with fish and meat dishes, and if we use it, we will get leprosy or pus? This misconception is common among people in the community that it is not bad to pay attention to what nutritionists say about the validity of this nutritional belief and check whether it is true or false.

Eating yogurt with fish and meat food is very harmful and according to the sages, it will produce raw sputum and a lot of phlegm. One of the most important causes of vitiligo (leprosy and blemishes) in terms of ancient medicine is the consumption of yogurt with meat (fish meat).

Vitiligo is a pigment production disorder in which melanocytes (cells that produce pigment) are destroyed in parts of the skin, mucous membranes, and retina. As a result, white spots appear on different parts of the body. Hair that grows in areas with psoriasis usually turns white.

One of the most important causes of psoriasis is skin contact with chemicals and genetic predisposition of the disease, which is caused by defects in enzymes such as caspase. In such cases, nutrition can play no role in the occurrence.

Another cause of nutritional disease is nutritional deficiencies such as folic acid and vitamin B12 deficiency. Dairy and fish, as both are animal sources, therefore contain significant amounts of vitamin B12, which not only does not lead to psoriasis but also theoretically prevents it. 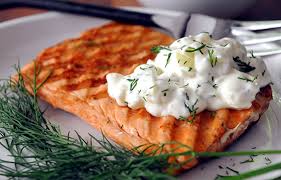 Other causes of psoriasis include inflammatory agents and autoimmune diseases such as rheumatoid arthritis, diabetes, lupus erythematosus, Hashimoto’s hyperthyroidism, scleroderma, Addison, and others. The common denominator of all these diseases is inflammation. Also, omega-3 in fish is one of the most important nutritional anti-inflammatory agents that is even prescribed as a supplement when people develop inflammation. Therefore, given that no dietary interactions have been reported between fish and dairy and the presence of omega-3s in fish, it still seems that not only does fish and dairy consumption not lead to psoriasis, but also It also prevents.

Using concealer is also a trick