In general, it is essential for people who want to live a healthy and long life to follow the proper diet that plays a role in preventing various diseases, cancers and premature aging. Join us to introduce you to the 4 main causes of common diseases and shortening of human life.

Synthetic sweeteners drastically reduce longevity. Many people mistakenly use artificial sweeteners to reduce their sugar intake, often unaware of the dangers of this substitution. Research over the past 30 years shows that, contrary to the claims of the food industry, artificial sweeteners stimulate the appetite and increase the desire for carbohydrates.

These sweeteners increase fat storage in the body by causing a wide range of metabolic disorders and cause obesity. Research shows that sweeteners such as aspartame are more sensitive to insulin than sugar.

Scientists have found that these substances disrupt the intestinal microflora and increase the risk of obesity and diabetes. The results of these studies have been completely proven. Artificial sweeteners alter the body’s metabolic pathways and cause metabolic diseases.

One of these pathways is the transport of sugar in the body, which changes in the presence of these sweeteners. Other problems that these substances cause are intestinal imbalance and glucose intolerance.

Glucose intolerance is a prediabetic complication that results in type 2 diabetes. Because large amounts of blood sugar are stored in fat cells, this complication also contributes to obesity. In addition, taking aspartame and other sweeteners increases insulin sensitivity and causes obesity. Inadequate diets high in sugar / fructose and whole grains such as gluten are a major cause of Alzheimer’s disease.

Another issue that has been overlooked about aspartame use is methanol poisoning. In a recent interview with Dr. Woodrow Monte, a toxicologist and author of The Silence of Science Against Killer Sweeteners, the relationship between spartam, methanol poisoning, and toxic formaldehyde was described.

Vitamin D deficiency in the body

One of the main factors in reducing the lifespan of vitamin D deficiency in the body. The last is about the importance of vitamin D for the health of the body. Adequate vitamin D in the body prevents a variety of diseases and will give us a healthier life and longer life.

One million people worldwide suffer from chronic diseases each year, which can be prevented by increasing vitamin D3 levels. Evidence shows that if the amount of vitamin D in the body is sufficient, the risk of death for any reason is reduced. So far, hundreds of benefits have been discovered for vitamin D. The benefits of this vitamin may amount to thousands, as about 10% of our body’s genes are affected by this vitamin.

If for some reason you do not have access to sunlight, it is recommended that you take a vitamin D supplement. For this purpose, instead of taking vitamin D2 in combination, you must take vitamin D3. Vitamin D is fat soluble, so it is best taken with healthy fats. Other substances that play a role in the better functioning of this vitamin are vitamin K2 and magnesium.

There are important reasons for these recommendations. The biological role of vitamin K2 is to help transport calcium to the right places in the body. If this vitamin is not enough, calcium builds up in the arteries and soft tissues of the body. Vegetables and seaweed such as kelp, dulse and nori are good sources of magnesium. Magnesium citrate and magnesium threonate are also good supplements.

Eating too much sugar in a diet high in sugar (such as processed fructose and whole grains) can cause serious problems such as obesity, diabetes and heart disease. These diseases are themselves a reason to shorten life. Because the sugar in 74% of these ingredients is added under different headings and with 60 different names, and in fact, in this way, the consumer is not informed about the amount of sugar he consumes, therefore processed foods, the defendants In the first row are white sugar and brown, honey, maple syrup and additives such as corn syrup, “sugar additives”.

“Sugar added to food is a major cause of disease,” says Rachel Johnson of the American Heart Association. Sugar is one of the causes of obesity and has a direct impact on longevity. One in five deaths in the United States is due to obesity.

Professor Cynthia Kenyon, who is considered by many experts to be worthy of the Nobel Prize in Longevity Research, has done much research and concluded that the consumption of non-plant carbohydrates has a direct effect on youth and longevity genes.

By eliminating non-plant carbohydrates in his experiments, Professor Canyon observed that the lifespan of c-elegans ringworms increased sixfold, and most interestingly, they maintained their health and youthful vigor until the last minutes of their lives.

The scientist’s findings were repeatedly tested in laboratories around the world on various mice and monkeys, and the results were successful. Because humans have genes similar to those of these animals, in experiments on humans, these results are not far-fetched. The food industry is trying to minimize the impact of consuming sugar and processed foods by creating advertisements.

Saturated trans fats have been a cause of heart disease for decades. In response to this, the food industry replaced trans fats with saturated fats, and the market for low-fat (but high-sugar) foods flourished. Since then, people’s health has declined, and millions of people around the world are dying prematurely because of this terrible mistake.

This fat contributes greatly to insulin resistance. The trans fats in hydrogenated vegetable oils act as a prooxidant and cause oxidative stress, which damages the body’s cells. Many researchers believe that trans fat is completely harmful and can not be considered safe.

Cholesterol is not the main cause, Dr. Fred Kummerow, who has been researching fats for eight decades, was the first researcher to report that arteries become blocked by trans fats, suggesting that they are a factor in heart disease. کرد.

In addition, trans fats inhibit the synthesis of prostacyclin. This synthesis is essential for blood flow. When the arteries fail to produce prostacyclin, blood clots form and sudden death occurs. Trans fat also plays a role in causing dementia.

From about 1980 to 2009, trans fat consumption fell by a third. But there are still many people who consume large amounts of trans fats in their diet.

The problem is that this fat is often hidden, because even products labeled “trans fat-free” contain this fat, because if the amount of this fat in food is lower than a certain amount, ‌ do not need factory The manufacturer should mention it in the ingredients and they will easily mislead the consumers with a legal loophole.

These by-products are so harmful that trans fats are less harmful than they are, and it will probably take decades to learn the consequences and dangers of these unsaturated oils.

Learn how to make dry shampoo for all types of hair 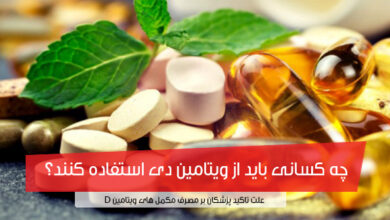 The importance of supplementation along with food sources